"Avery" is my pick girl out of the Peyton/Indy Litter.  Debbie Clemons bred this litter and raised them at her house.  She did an absolutely fantastic ob with the puppies.  Shea and I helped her whelp them and helped with the pictures, grading, etc. but Debbie "did the work".  I am so thankful that she allowed me to have Avery out of this litter.  When we were grading and placing the puppies, I couldn't stand to have Avery go.  So, I called Suzy Gehrls and told her "have I got a puppy for you".  The rest, as they say, is history!  she is a lovely girl - very fancy but has nice forechest and front angle.  She is very sound and has a beautiful rear.  She loves to show and I am just along for the ride! :)

2/02/2017 - Avery goes Best of Winners for 2 points at the Sporting Dog Association of Arizona under j. Donna Ernst.

8/19/2017 - Avery has been on a break due to Suzy moving from California to Arizona.  She is finally back in the show ring and took Best of Winners for a 4 point major under j. Karen Rooks Nauer at the Irish Setter Club of Colorado specialty in Greeley, CO.

9/30/2017 - Avery wins a 3 point major to finish her championship under j. Ann D Hearn at the Grand Valley Kennel Club show in Grand Junction, CO.  She is now a champion!!!

8/16/18- Avery debuts as a special at the Colorado Irish Setter Club specialties.  She finishes the day by going Select Bitch for a 5 point grand champion major her first day out!!

9/12/18 - Avery takes an Award of Merit at the Irish Setter Specialty of Las Vegas.  Thanks to judge Barbara Dempsey Alderman.

9/14/18 - Avery moves up to Best Of Opposite today.  We were very proud of her. She now has her Grand Championship!

10/22/18 - Avery goes Best of Breed at the Rapid City Dog Show under j. Don Sutton.  There were some really nice bitch specials there so we were pleased!

10/27/18 - Avery goes Best of Breed at the Buckhorn Valley Kennel Club today under j. Alberto Berrios.  And Mija goes BOW!  It was a great day!!

11/4/18 - Avery goes BOS under j. Marilyn Pipes today at the New Mexico Sporting Dog Club.  Cinna was BOB who is one of my dogs so it was a win/win!!

11/12/18 - Avery wins Best Of Breed under j. Debra Thorton.  There was some really nice competition so we were thrilled.

GCHB. Galewinns Kickin' Up Some Dust 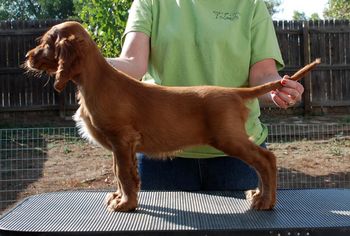 Avery winning her first major at the Greeley shows. 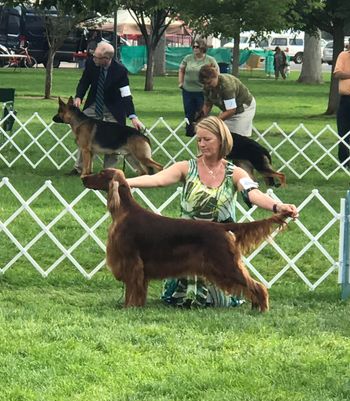 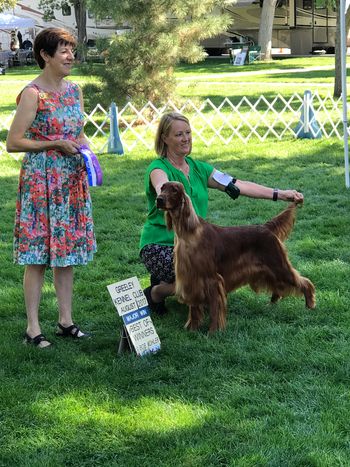 Avery at the Greeley Specialties in Aug. 2018. 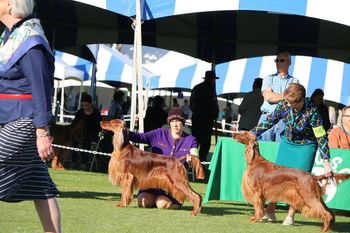 Avery being shown by Melissa Mato in Palm Springs in Jan. 2019. Photo by Leslie Brochu. 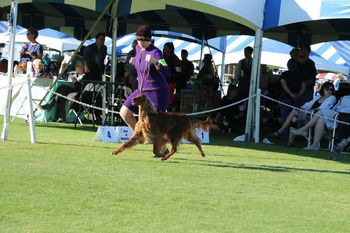 Avery moving in the ring. Photo by Leslie Brochu. 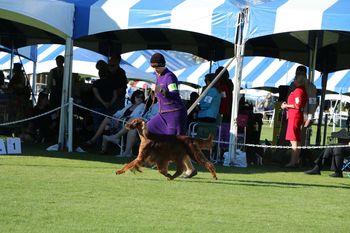 Avery moving in the ring in Palm Springs. Photo by Leslie Brochu. 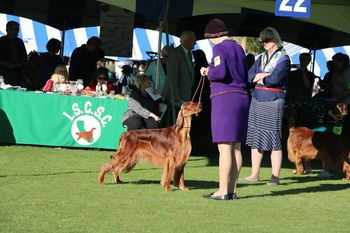 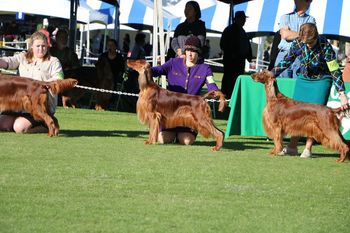 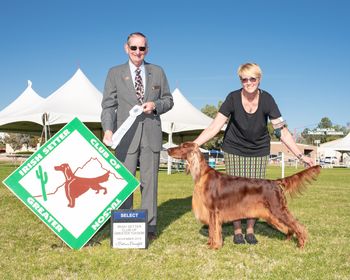