PJ is the girl that I am keeping out of the Wilson/Rio litter.  She has stolen my heart from the beginning with her darling personality and precocious ways.  She has said "pick me" from the start.  I co-own PJ with Shea Jonsrud who will be helping me to show and train her.  She has a lovely front and such style....watch for her in the show ring soon.  Where did her registered name come from you ask??  I did a mixed drink litter theme and Bananas & Pajamas is a drink that contains:

May 11, 2014 - PJ goes Winner's Bitch for a 4 point major in Topeka, Kansas!!!  How awesome is that!  Her brother (Ozzie) went Winner's Dog and Best of Winners for a 4 point major also - his second major already!  Thanks to j. Ms Peggy Beisel-McIlwaine for acknowledging our puppies.  Ozzie was also Best In Sweeps and Best Puppy and PJ was Best Puppy at the Kansas Specialties.

June 13, 2014 - PJ takes a 3rd in her 6-9 month old puppy class at the Irish Setter National in Ohio!!!  Thanks so much to breeder  j. Laura Edwards. There were 22 beautiful puppies entered from all over the country - I was just trilled with her placement.  Any ribbon is amazing at the National!!  She handled the trip well and had a ball playing with all of the puppies there. Scroll down to see some pictures of PJ in action at the National.

Oct. 6th, 2014 - PJ wins a point at the Sporting Dog Club of Colorado Springs under j. Betsy Horm Hummer. Her brother won that day also so made it a good day!

2/28/15 - PJ wins her second major at the show in Scottsdale, Arizona under j. Hilderman.  So happy...she is now a champion!!!  PJ will now be working on obedience and will eventually be bred so a very special boy....

2/16-19/18 - PJ returned to the show ring to work on her grand championship.  She had a great first weekend by going Best of Opposite Sex all 4 days.  She will be shown in the next few months to hopefully complete her Grand Champsionship before she is bred for the last time in April.

2/18 & 2/19/18 - PJ was shown in Juniors by my wonderful but very novice grandaughter Payton.  She won her class both days with PJ - we were thrilled.  PJ was the perfect dog - she was truly amazing with Payton.  Payton is 9 years old and PJ is bigger than Payton! lol 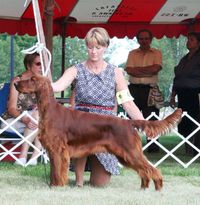 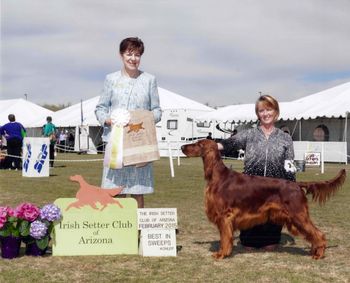 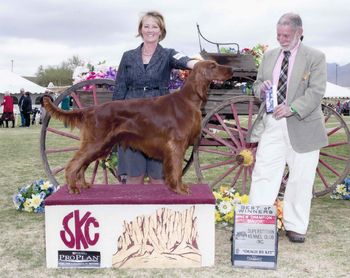 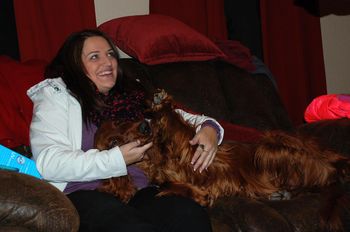 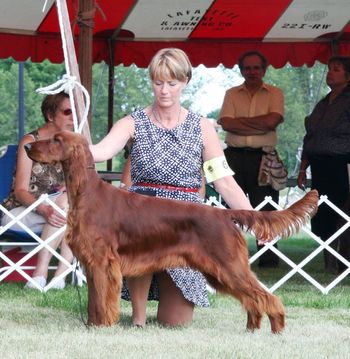 PJ being shown in Milwaukee, Wisconsin at the specialties there. She was BOS in sweeps and took 2 major reserves. Not bad considering she was the youngest of 16 bitches entered! 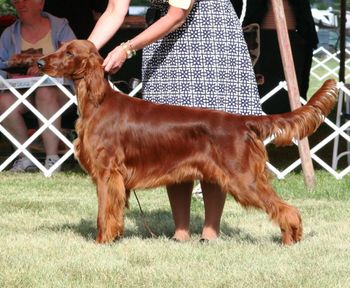 PJ at 9 months old at the Milwaukee specialties. 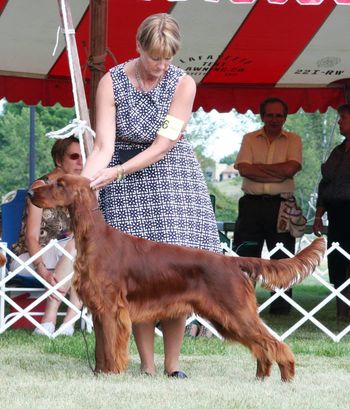 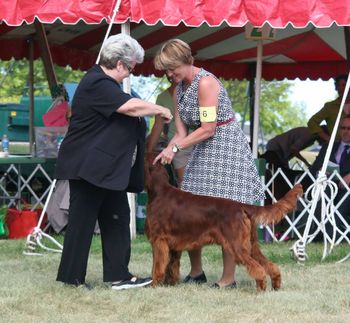 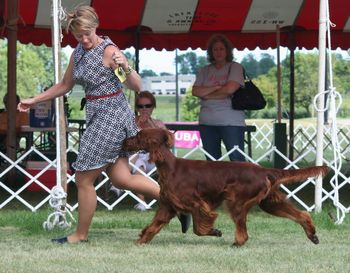 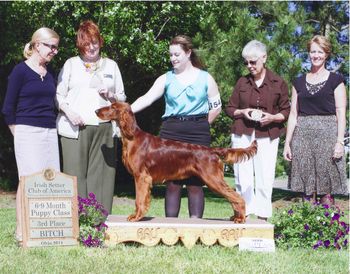 PJ gets a 3rd place in the 9-6 month puppy class at the Irish Setter National. So pleased as there were 22 nice puppies in this class! She is 8 months old. June 2014 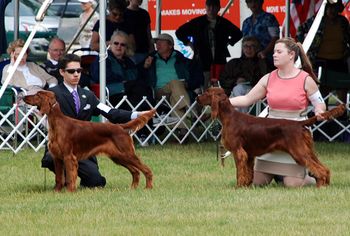 Here is PJ (peach girl) and her sister Devon (pink girl) being shown at the National in June 2014. 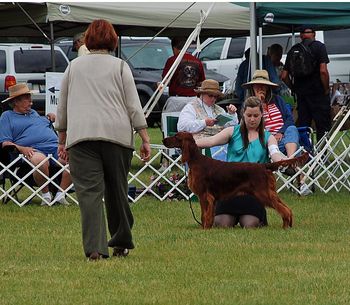 PJ being shown by co-owner Shea Jonsrud at the national. Shea always makes her look so good!! 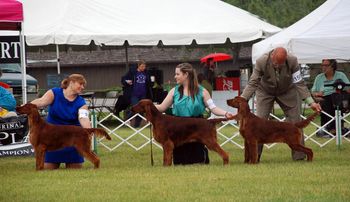 PJ is 8 months old in these picutres at the National in Ohio. 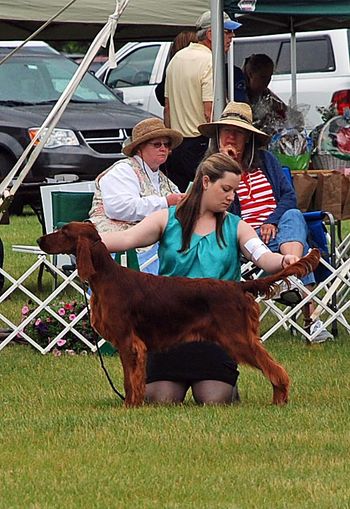 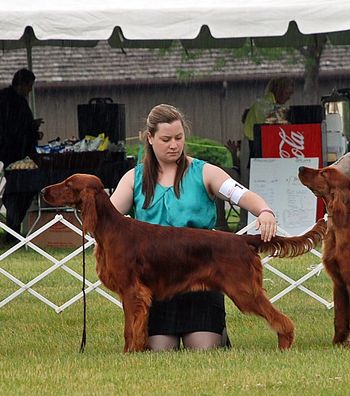 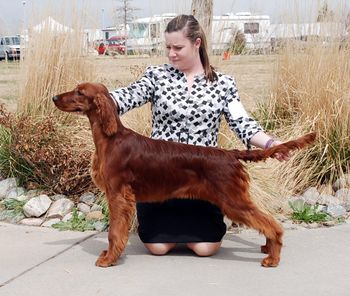 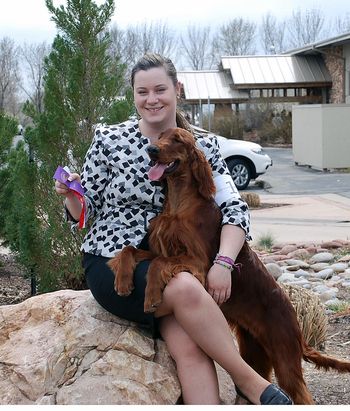 Shea and PJ after winning her first point her first time in a show! 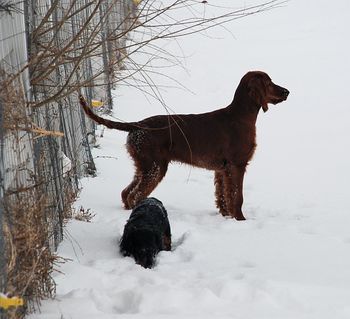 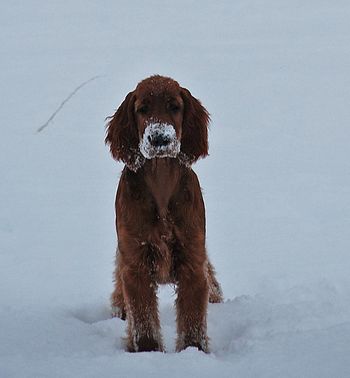 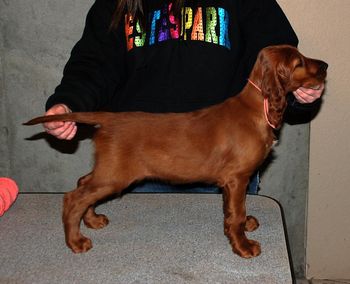